Electrical fires at church put out with extinguishers 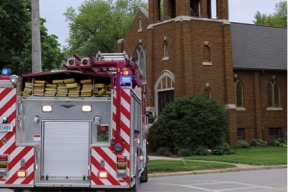 ARLINGTON, NE – Quick thinking from Arlington Community Church members prevented two electrical fires from spreading. First, a meter on the south side of the building caught fire from an electrical short, but was quickly put out by a neighbor with a portable fire extinguisher. Power was shut off to the building while two congregation members who own an electrical business repaired the meter. After the power was restored to the church, the electricians discovered that the dishwasher had caught fire as well. Another portable fire extinguisher was used to put out the flames. No one was harmed as a result of the fires, but the church will be closed until further notice.