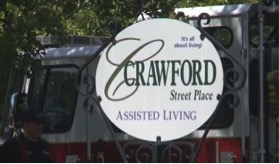 DENISON, TX – Early in the morning, staff at the Crawford Street Place Assisted Living Center discovered a fire that was ignited due to a light fixture shorting out. The residents of the retirement home were quickly evacuated from the building to another center in Denison. The retirement home staff was able to assess the issue in the kitchen and put the flames out with a portable fire extinguisher before firefighters arrived on the scene. Due to the quick actions taken by the staff, nobody was hurt as a result of the fire. The occupants of Crawford Street Place were able to move back into their homes later that evening.